The Big Give to Valley County 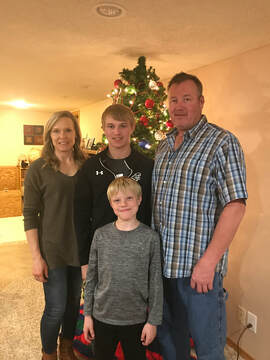 Pictured:  The Lane family of Ord;  Jill, Owen, Chad and Evan (center)
ORD, Neb. – Why did you choose to give to Valley County Health System Foundation, I asked as I sat on the bedroom floor with Evan Lane, age 9 of Ord. You see, Evan had picked the VCHS Foundation as the organization he wanted to give to during the recent Big Give to Valley County. Evan answered immediately stating, “Because they help people in need”.

I continued my conversation with Evan and asked him how making the donation made him feel, “Happy!” was his quick response. When I asked him if it was hard to save money he told me, “No”. Evan also told me that he has made a donation to the Ord Volunteer Fire Department, and when asked if he has learned anything by his parents teaching him to save and give back he told me, “I’ve learned not to always spend everything I get.”

The heart of a child learning to give is something we should all work to teach our children and grandchildren. I spoke to Evan’s mom, Jill, and asked her how she helped her boys start saving. Jill stated, “When they started getting an allowance we told them that part of the money had to be put toward their own savings account, part had to be donated, and the rest was spending money.”

When I asked Jill how it made her feel when she saw their donations in action and who they chose to donate to she told me “I was really pleased to see the organizations they chose. They both chose places that will have an impact on them and others in our community.” Jill had also decided right before The Big Give to match the boys’ donations, and when I asked her why she told me, “I guess I just wanted them to see that I was donating my money as well and that their money was now being doubled to the cause they chose.”

As I continued my conversation with Evan, I asked him if he thought other kids and adults should also give back to their community and why, and again he was quick to respond saying, “Yes! Parents need to teach their kids to save and donate. You know you can help people when you give and that they will get the help they need. ” I would say those are some wise words from a giving, young man.

In concluding my talk with Jill, I asked if she had any advice for parents to help encourage their children to save and give back. She stated, “Start small, it doesn’t need to be anything extravagant. Let them see you donating as well, whether it is your time as a volunteer or a monetary donation, it all makes a difference and adds up.” I couldn’t agree with her more. Children learn by example, and just think what a difference you can make for the future when you set the example of giving back your time, talent and/or treasure.
I finished by talk with Evan by asking him what he wanted to be when he grew up, and he told me he would like to be a spy or investigator. I think you will make an amazing spy Evan, and I can’t wait to see all the great things you accomplish as you keep learning, growing and giving.

I want to personally thank Evan and Jill for sharing their giving story. I hope it will inspire each of you when reading this to start small, because as Jill stated, “it all makes a difference and adds up.”
(Story by Becky Ries, Executive Director)
google-site-verification=nYcS2AFTV-sOyXiTPACItZ-abQQxuWMcQ82r7yY8j-s